The most recent AGO/Quimby Regional Competition for Young Organists was held in 2019. Initial rounds were sponsored at the local level by AGO chapters, and each winner advanced to a final competition in the context of their regional convention. The seven first prize winners would have performed as Rising Stars at the AGO 2020 National Convention in Atlanta, but instead we are happy to be able to share their recorded performances here. 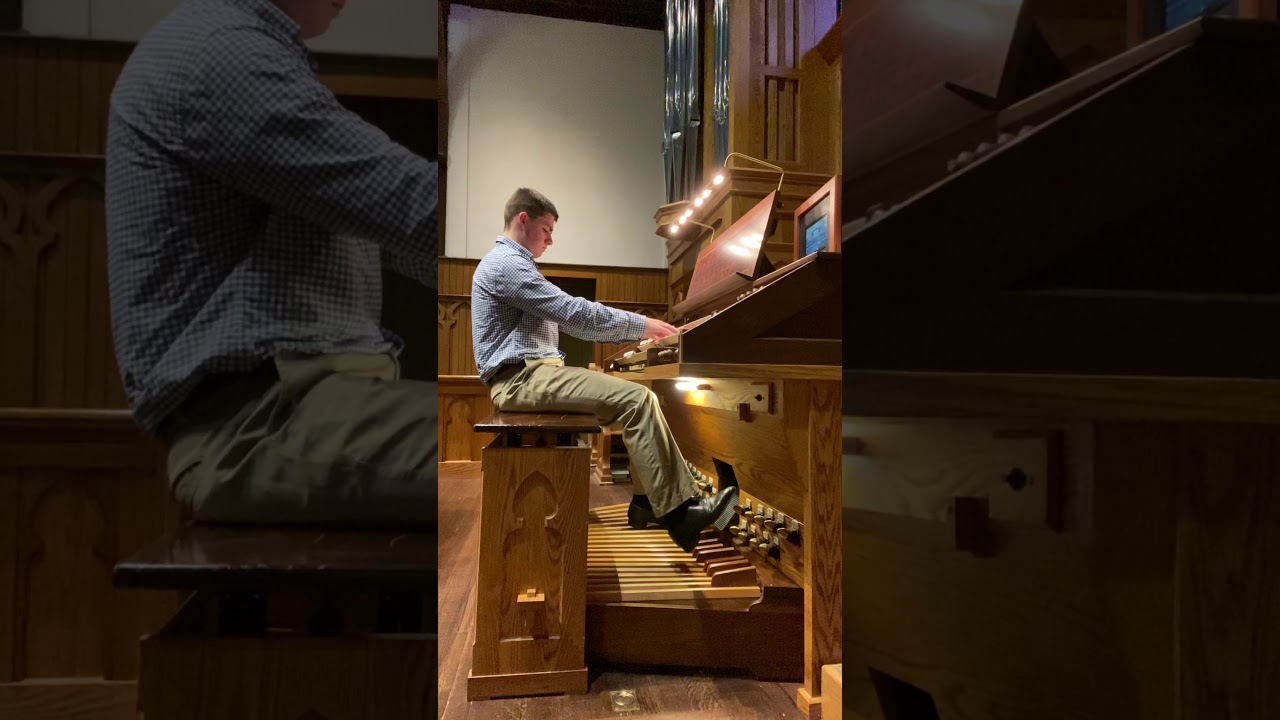 Luke Brennan is an undergraduate student at the Eastman School of Music in the studio of Professor Nathan Laube, pursuing his Bachelor of Music in organ performance. Prior to matriculating at Eastman, he studied under Mr. Christopher Betts, current Director of Music at St. Paul's United Methodist Church (Houston TX) and the former organist for the Washington National Cathedral and Director of Music at Church of the Redeemer (Bethesda MD). Under Mr. Betts, Luke assisted in performances on the Washington National Cathedral's grand organ, including Evensong services and holiday performances by the Washington National Cathedral Choir of Men and Girls.  Additionally, he performed weekly services as an Organ Scholar at Redeemer and has played solo works and provided organ accompaniment for choirs during tours of Europe, playing at venues such as the Cathedral of Notre Dame, Kaiser Wilhelm Memorial Church, Mozarteum Salzburg, Chiesa di San Marco, and others. Luke earned Highest Distinction when passing his Associated Board of the Royal Schools of Music (ABRSM) assessments in both organ performance and music theory. He has had the good fortune to work with artists such as Nathan Laube, Bruce Neswick, Faythe Freese, Joby Bell, Todd Fickley, Tom Bara, and others during participation in the AGO POE-A in Birmingham, Alabama, at Interlochen Arts Camp, and elsewhere. Luke is also an accomplished pianist and choir singer and was selected for Virginia All-State and Honors Choirs. In his free time, Luke enjoys hiking, biking, and soccer and is a huge hockey fan.

The Ecstasy and Reflection from Resurrection, Larry King (1932‑1990) 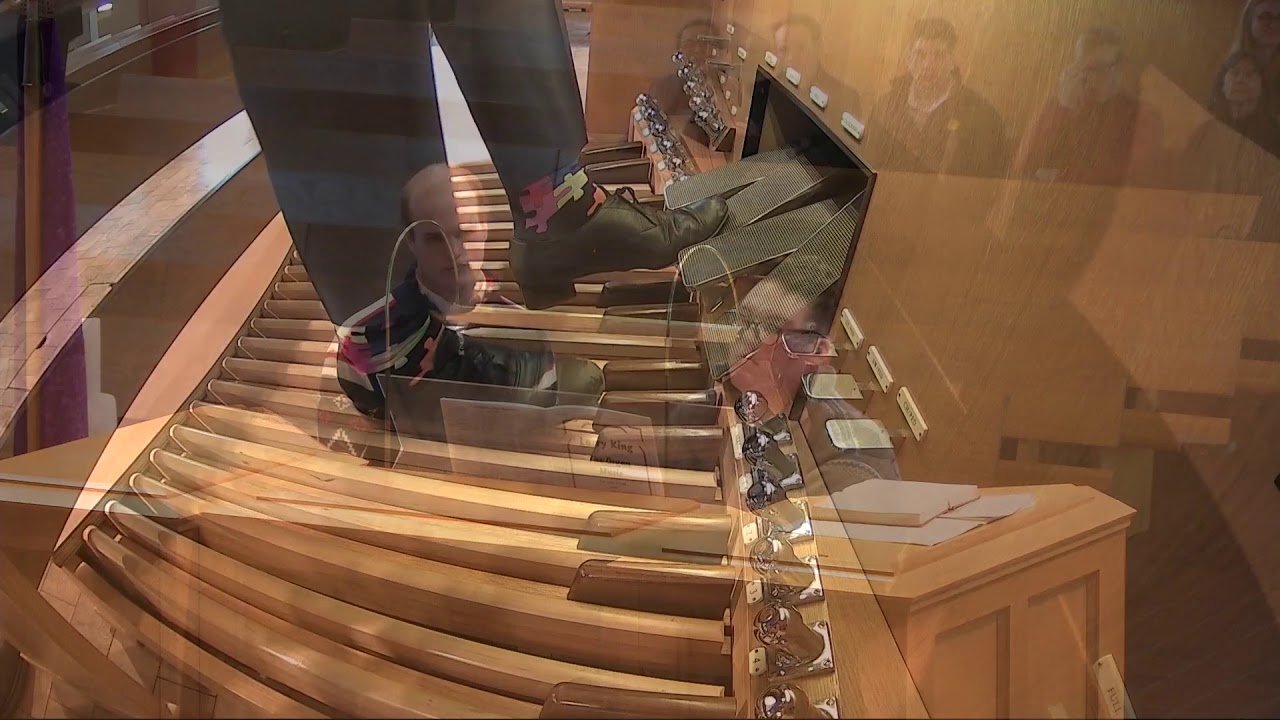 Michael Terry Caraher, a native of the San Francisco Bay area, is a senior at St. Olaf College in Northfield, MN. He is an organ student of Dr. Catherine Rodland, having completed his B.A. in American studies and now pursuing his B.M. in Church Music (organ emphasis). Michael is the 2019-2020 recipient of the John R. Rodland Memorial Scholarship and is the organ scholar at the Church of St. Louis King of France in St. Paul, MN, under the direction of Mr. Brian Carson. Before coming to St. Olaf, Michael studied with Mr. Thomas Bara at the Interlochen Arts Academy and Camp, where he was a four-year-senior at the Academy, and Dr. Susan Jane Matthews at St. Paul’s Episcopal Church in Burlingame, CA. Michael has been a part of recitals or has performed himself at The Church of St. Louis King of France, Grace Cathedral (San Francisco CA), The Washington National Cathedral, Central Synagogue (New York City), St. Andrew’s Cathedral (Aberdeen, Scotland), and the Jacobikirche (Lübeck, Germany). In addition to his organ studies, Michael studies voice with Dr. Anton Armstrong and sings Tenor I in the St. Olaf Choir. When he’s not on “The Hill” practicing or studying, Michael can be found in Northfield or the Twin Cities metro area with his friends. He is very excited to have this opportunity to perform as a “Rising Star” at the 2020 AGO National Convention. 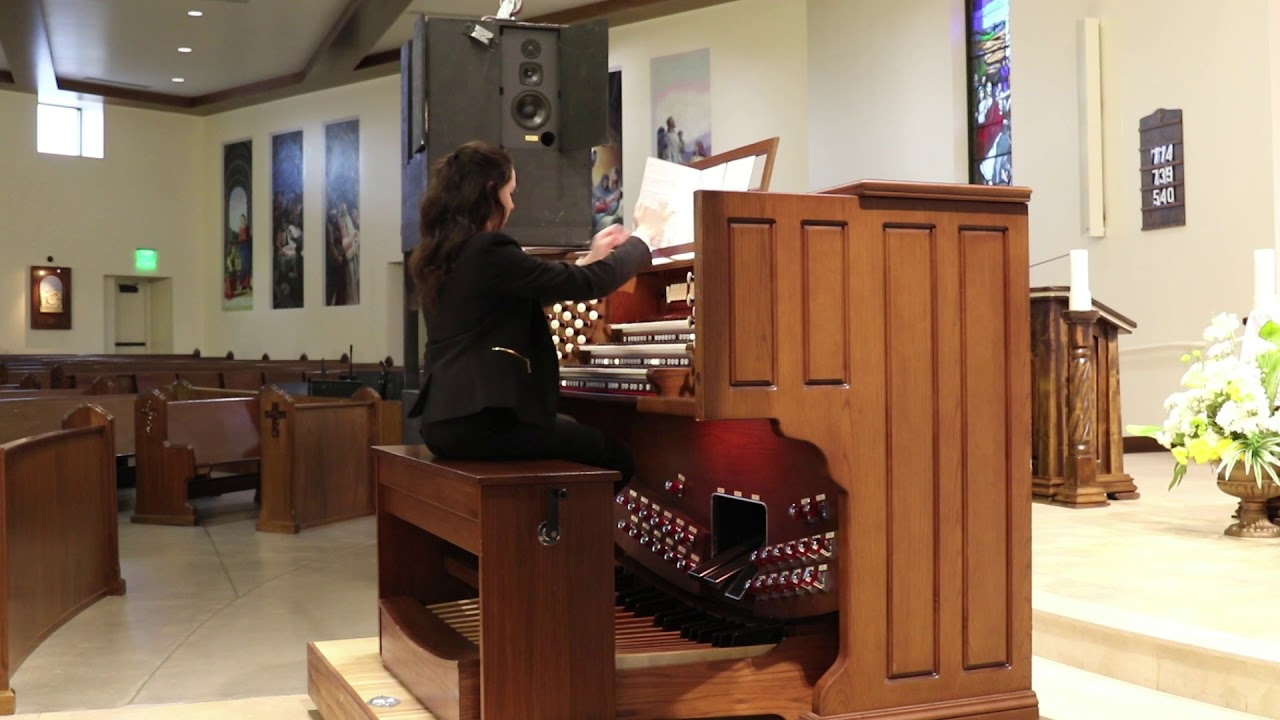 Amber Dahlberg is a senior at Brigham Young University in Provo, Utah. She is studying Organ Performance with Dr. Don Cook and Dr. Neil Harmon. In spring 2018, Amber joined BYU’s study abroad program in France, where she was able to play historic organs in Rouen, Lyon, Toulouse, and Paris, and she looks forward to visiting and playing Germany’s notable organs in the spring of 2020. In addition to playing the organ and piano, Amber is an associate carillonneur at BYU, where she plays the Centennial Bell Tower for noon recitals and graduations. Amber plans to continue her education by pursuing a master’s degree in organ performance beginning in fall 2020. 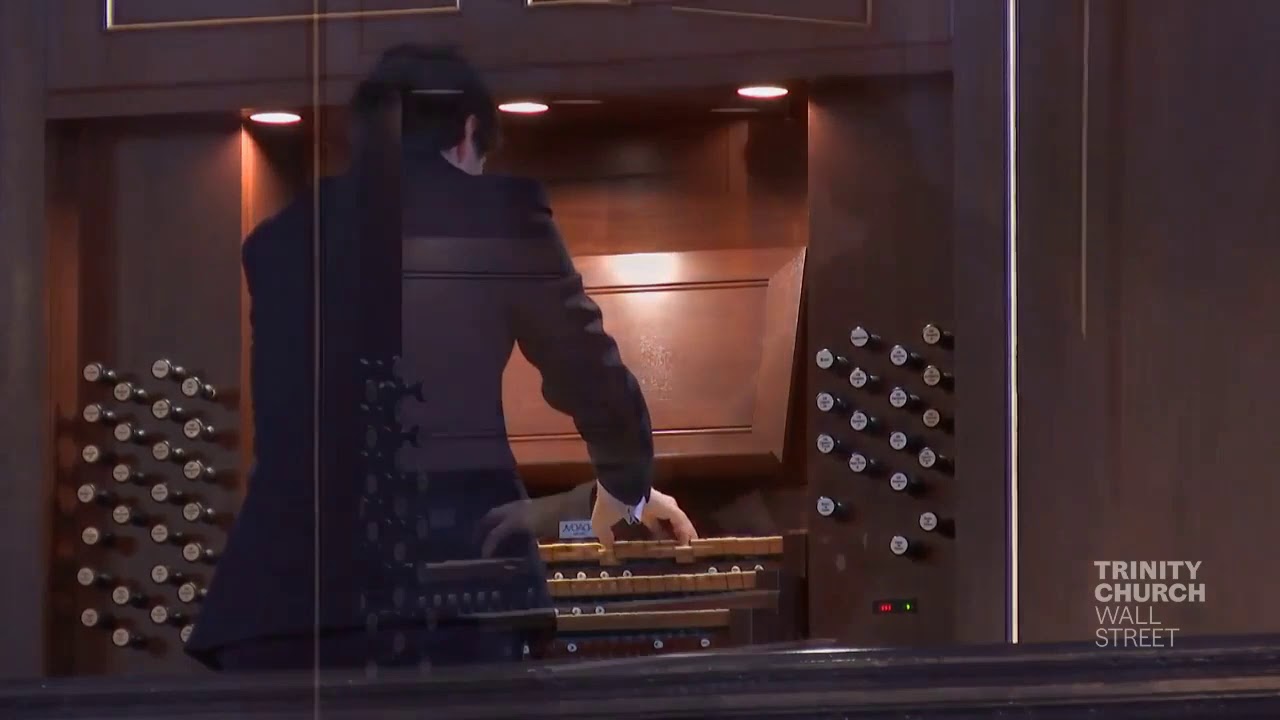 Martin Jones is a rising senior studying with Ken Cowan for a bachelor’s degree in organ performance at Rice University. Martin was a finalist in the 2016 Albert Schweitzer Organ Competition in the High School Division, also winning the hymn prize and the audience prize. Previously, he studied for three years with Thomas Bara at Interlochen Arts Academy, where he received the Fine Arts Award. He has played in masterclasses with notable performers including Alan Morrison, Nathan Laube, Daniel Roth, Paul Jacobs, Peter Richard Conte, and David Higgs. Martin is also studying harpsichord with Mario Aschauer and is an alumnus of the American Boychoir School. Since 2018, Martin has been the Moseley Memorial Organ Scholar at St. Thomas’ Episcopal Church in Houston.

At the Ballet and Those Americans from Five Dances, Calvin Hampton (1938‑1984) 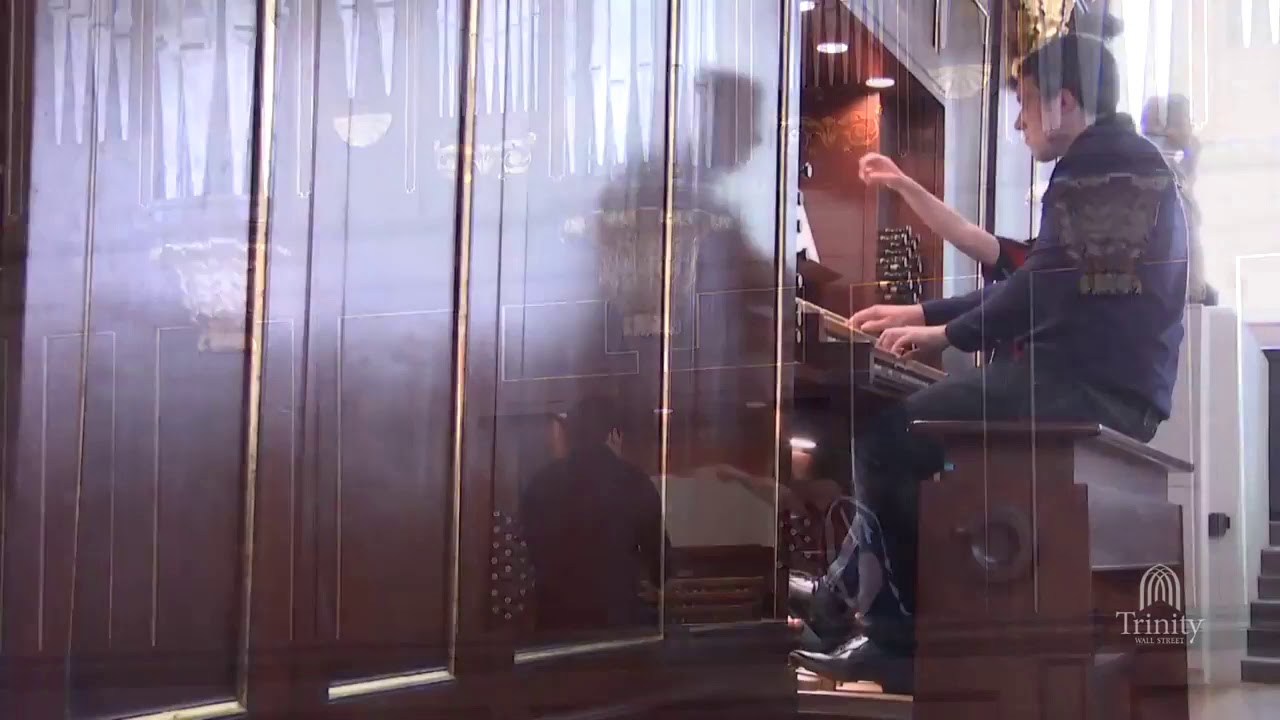 Noah Klein is entering his senior year at the Jacobs School of Music at Indiana University, pursuing an organ performance degree under Dr. Janette Fishell. While at school, he is the Musical Intern for Tabernacle Presbyterian Church in Indianapolis, Indiana. At home, he plays for his father’s church, Trinity Lutheran Church in Northfield, Minnesota. He was the winner of the Great Lakes Regional RYCO at the regional American Guild of Organists convention in Grand Rapids, Michigan. Noah also had the opportunity this summer to play at Trinity Church on Wall Street in New York City as part of their "First Friday" series, which features undergraduate and graduate organ students from leading music conservatories across the US and Canada. 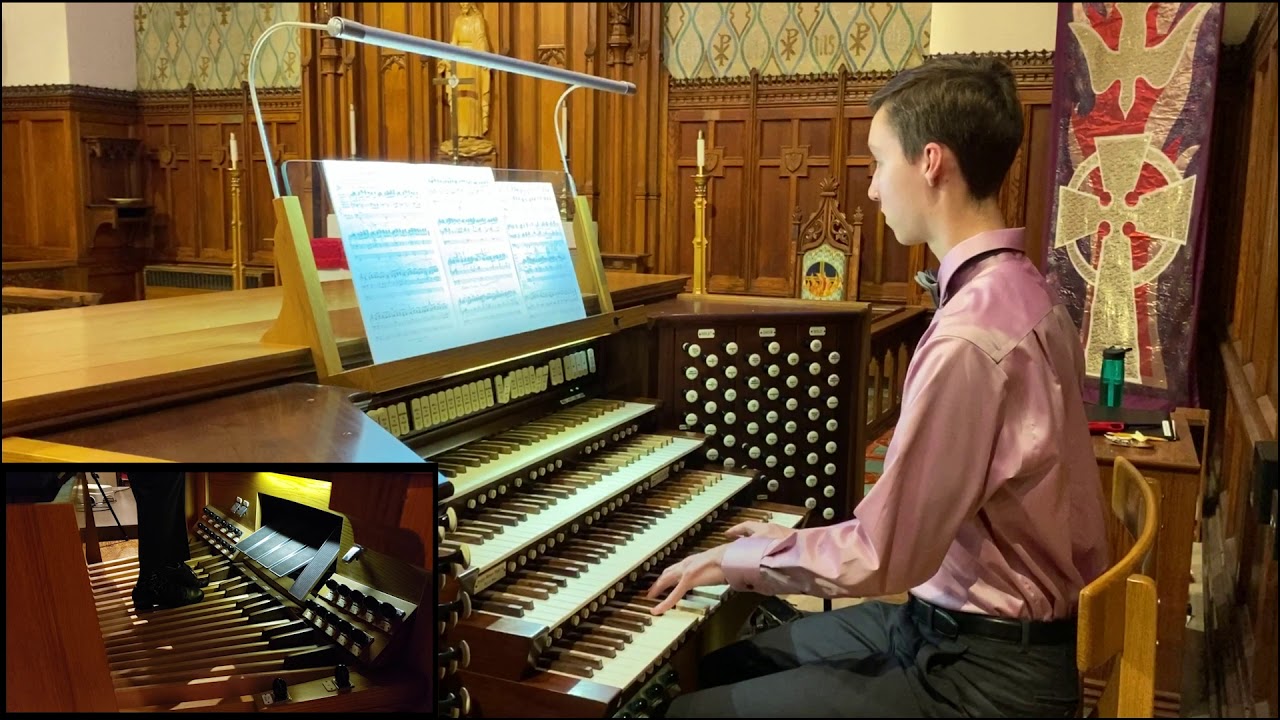 Nicholas Stigall, 19, is the first prize winner of the 2019 Southeast AGO/Quimby Regional Competition for Young Organists. A native of Knoxville, TN, he began organ lessons with Dr. Edie Johnson at the age of fifteen. He is currently a freshman majoring in organ performance at the Jacobs School of Music at Indiana University, where he is a recipient of the Barbara and David Jacobs Scholarship and studies with Dr. Janette Fishell. Nicholas is also an undergraduate organ scholar under Dr. Marilyn Keiser at Trinity Episcopal Church in Bloomington, IN.

Nicholas has been the recipient of many awards in both piano and organ performance competitions. These include first prize, the Bach prize and the Hymn prize at the Greater Columbia, SC American Guild of Organists Organ Performance Competition in March 2018, as well as first prize in the High School Organ Festival and Competition held in Winston Salem, NC at The University of North Carolina School of the Arts in January 2019. As a pianist, he was the first prize winner in solo piano at the Tennessee Music Teachers Association Competition in June 2017 and June 2018. Additionally, he was awarded scholarships through the Brock Organ Education Fund through the Knoxville AGO for school years 2017 and 2018.

Nicholas plans to pursue a career in organ performance/sacred music and enjoys yoga and caffeinated beverages in his free time. 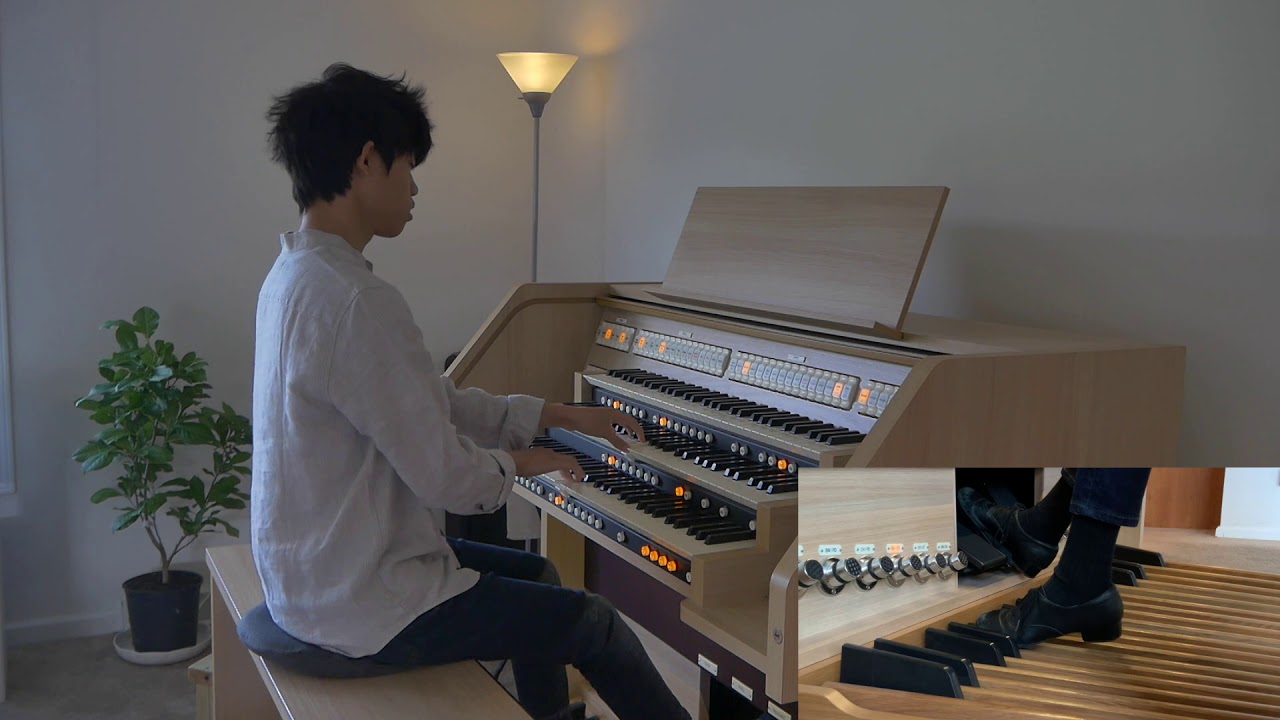 Eddie Zheng, a native of New York City, is a student of Paul Jacobs at the Juilliard School. He attended the Juilliard Pre-College division for two years, studying with Matthew Lewis. Eddie has won several awards, including first place at the 2018 Albert Schweitzer Organ Competition, the 2019 Brooklyn AGO Organ Scholarship Competition, and the 2019 AGO Quimby Northeast Regional Competition. In the summer of 2017, Eddie attended the McGill Organ Academy with Hans Ola Ericsson and the Oregon Bach Festival Organ Institute with Paul Jacobs, to which he returned this summer. In addition to having performed at venues in the United States, Eddie has performed in China at the National Centre for Performing Arts in Beijing, Beijing Concert Hall, and the Beijing Golden Sail Concert Hall. Eddie is currently the Associate Organist at Calvary Baptist Church in Manhattan. He was also the 2018-19 Knock Intern for Sacred Music at Rye Presbyterian Church. When not playing organ, Eddie loves filmmaking, music production, and playing ice hockey.